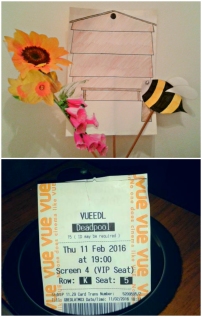 Well well well, it has been a busy few weeks, but I can now reveal a literal and exciting leap into the unknown.

At the beginning of February, my plan for festival domination kicked off…mark two (though I’ll save that story for another time). February is usually the first of the many upcoming festival application deadlines, and so far, so good. ESAF ended over a week ago, and on the Tuesday before it (cue the reveal)…. I accepted an upcoming role with EISF as a Science Communicator!

(I honestly thought I would have a greater chance of getting the front of house role. C’est la vie, this one is way better!).

I can’t tell you why I was chosen, but I bet you it had something to do with this lady to the left and her knees… (I’ve been wanting to show off my props for weeks now, I’m weirdly that proud of them).

Somewhere in the mix, a 9 year anniversary reared it’s head, so obviously you do whatever any long-term couple (with zero interest in marriage/kids unlike many in the social circle who have done so in less time) would do. Deadpool and dinner a day early, and on the actual date? Lazing and Lego Avengers. And they say romance is dead. (There was also a rose and chocolates for the lowly barman who was spending his usually uncelebrated Valentine’s with his customers. In return, I received pizza and chicken. Fair trade, methinks).

All conveniently coinciding with the 6 Nations (our first win in 10 matches! Rejoice!), a pitch has a been written for the potential awarding and attachment to a theatre in London, a further script idea in planning, courses and a haircut has been booked, a return to the (now snowy) Alps was inbound, a house clear-up was (and still is) underway, and on Sunday past I returned from said snowy Alps.

Hopefully, as my festival applications continue, I will have more secrets and leaps to divulge. I had planned to post this before I left but I ran out of time, however, I spied some recent daily prompts and thought they fitted quite nicely.

See you Sunday for the round up!

4 thoughts on “Knees of the Bee”